The round of 16 of the first edition of the FISU AMERICA eSports – FIFA20 are already here.

After the draw, made last night, when the games of the group H finished, and we met the last two qualified between to the top 16 of the competition, the athletes and organizing committee, met through a videoconference, where the playoff were drawn.

First we will remind you the qualified in each group, and then we are going to expose the results of the draw made last night that will be played today, where only eight players will move to the next stage.

After mention all the qualified between the top 16 of our continent, we want to show you how the play-off were drawn: 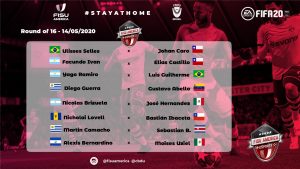 Tonight from 10pm (GMT -3) you can follow all the games of the round of 16 through the Official YouTube FISU AMERICA Channel.