The tenth day of competition in the FISU AMERICA eSports – FIFA20 is here and the protagonists are going to be Ulisses Selles and Moises Canales, who are going to play the big final for the first international university competition of esports.

The way for title of the best player of FIFA20 of America wasn’t easy for these students. On one hand, there is Ulisses Selles, from the Universidade Anhembi Murumbi, who faced his compatriot Luis Guilherme, student of the Universidade Federal do Mato Grosso, for the first the semi-finals, where after the two games, the global score was 5-3 (2-2 / 3-1).

Today, May 17th, at 10pm (GMT -3) through the oficial YouTube channel of FISU AMERICA, the games for the third place and the big final, format ‘’best of three’’, can be followed.

Who will be the 1st Pan-American eSports FIFA20 Champion? 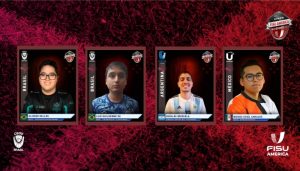