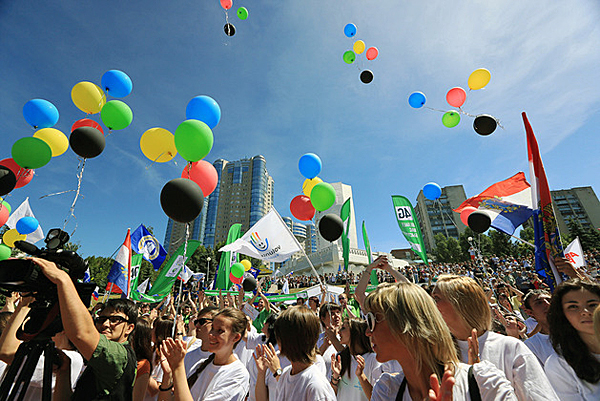 Below, the best summary of FISU America annual activities in 2017:

With some Americans countries first presence in a Winter Universiade, Almaty (Kazakhstan) had the biggest American participation in terms of the presence of countries.

Canada and United States guide others with their tradition in this kind of competitions, and numerous delegations of 88 and 73 athletes, respectively. Students athletes of Brazil, Argentina, Mexico and Chile added up, with smaller delegations that marked presence, and looked after promoting winter sports practice in their universities. In total, there were 169 American competitors.

Beyond sports results, the American countries presence was pointed as a growth in this and future competitions. The second Beach Games in Maceió, Brazil, brought together 10 countries with 350 students / athletes who competed in handball, soccer, volleyball and tennis. In addition to the countries of America, which repeated their presence, there was a representative combination of the African continent.

Brazil, the organizer, shined in Maceio. It showed a first level organizational aptitude, and a sport quality that finished carrying 6 of the 7 gold medals. The only gold medal that did not remain in the organizing country was achieved by the National University of La Plata (UNLP), Argentina, in men’s tennis.

The competition ended as it started, in the best way, and with athletes highlighting the great infrastructure and excellent ornamentation displayed by the Brazilian Confederation of University Sport (CBDU). FISU America Forum celebrated with total success in Puerto La Cruz, Venezuela, with around 200 assistants, and dissertations selected from tens of works with national and international quality.

The opening ceremony was headed by the Minister of University Education, Science and Technology, Hugbel Roa; the mayor of the Bolivar Municipality, Barcelona, Guillermo Rodríguez; the president of FISU America, Alim Neto; the 1st Vice President of FISU, Leonz Eder; the Simón Rodríguez University principal, Alejandrina Reyes; the director of the National Sports Institute, Pedro Infante; and the president of the Organizing Committee, Sandy Rodriguez.

Students from more than 10 universities were also part of the activity, important to take the sport as a sign of peace and union, in the delicate situation that was crossing the host country.

Beside the organizing country, there were representatives from Argentina, Brazil, Canada, Colombia, Cuba, Costa Rica, Honduras, Dominican Republic, Switzerland and Uruguay, to exchange their experience and expand their knowledge about the several aspects of the sports environment in which they work. The forum included topics such as Sports Management and Sports Policies, Sports and Human Development, Anti-doping, Training, Medicine and Psychology, among others.

In parallel with the forum, the ODUCC 2017 Games and FISU Americas Executive Committee work meetings were developed, which highlighted the organizational effort carried out by the coordinators.

In addition, the following awards were presented: Taipei host the largest sporting event in its history, Sumer Universiade 2017, which brought more than 2,000 students / athletes, officials and coaches from across the American continent.

America brought 40 teams, in one of the most important continental participation in history, to Summer Universiade Taipei 2017. Among them were volleyball, basketball, waterpolo, football and baseball, in both genders. With the presence of 14 institutions from all over the continent, in both genders, the Pan American 3×3 Basketball Tournament was played at National University of La Matanza (UNLaM), in Buenos Aires, Argentina. The competition, by teams and not by country, defined four places for the World League of the discipline in Xiamen, China.

Between women, Catholic University of Chile and UniNassau of Brazil, classified after defeating in semifinals to Pontificial Javerianan University (PUJ) of Bogota and National University of La Matanza (UNLaM), respectively. Meanwhile, among men, the organizer UNLaM is one of the classified, after beating Arturo Prat University (Chile), while the other finalist is Chile University, who won the other semifinal to the Chilean University of Antofagasta. In this way, Chile with a team by branch, Brazil and Argentina, will be the representatives of the American continent in the next World League.

All Pan American were broadcast live on www.deportv.gob.ar and http://www.el1webtv.com.ar/ The president of FISU, Oleg Matytsin, joined the FISU America’s countries, in a new working assembly, to analyze the present and planify the future of university sports in the continent. Matytsin, who was accompanied by the vice presidents of FISU, Leonz Eder (Switzerland) and Luciano Cabral (Brazil), highlighted the fact of 32 countries of America being organized and promoting the growth of university sports in their regions. It was also present African Federation of University Sport (FASU), Michael Malumbete.

After the words of FISU president, a review of the schedule of international competitions organized by FISU America was made. Among the next commitments are the Pan American University Games, from July 20th to 29th, 2018, in Sao Pablo, with 10 sports. It will be the first edition of these continental games. This games came as a collaborative work between the Brazilian University Sports Confederation (CBDU), FISU America and the Amazonian University Sports Federation (FAUD), along with official endorsement from FISU. This year’s setting of the event on beaches away from the ocean showed the possibility and versatility of the beach games concept.