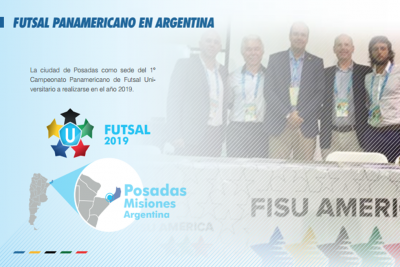 In the city of Posadas, Misiones, Argentina, will be carry out the 1° FISU AMERICA Futsal, between the 20th and 26th of September, where teams from Argentina, Brazil, Chile, Costa Rica, Mexico and Peru, are going to fight for the championship.

The Polideportivo Municipal Ernesto ‘’Finito’’ Gehrmann is going to be the main stage, and also with the Polideportivo El Zaiman, will receive to the athletes-students of this sport for this inaugural edition of the FISU AMERICA Futsal Posadas 2019.

The competition will have 10 teams in the male branch, divided in two 5 teams groups, where the winners of each group will play the final of the championship.

In the female branch, the 6 teams will be in the same group, and the first, and second in the classification, will play the final.

The group draw was carried out in the headquarters of the Federación del Deporte Universitario Argentino (FeDUA) the day 4th of September and here we show you the draw: