The EC Meetings of FISU is being held within the framework of the 29th Winter Universiade Krasnoyarsk 2019, and the FISU AMERICA’s president, Alim Maluf Neto, is there in representation of our organization.

The Secretary General-CEO Eric Saintrond said that FISU is moving steadily forward with its digital-first plans. “The Winter Universiade will be streaming live on the Olympic Channel as well as the newly-launched FISU.TV. Viewers all over the world will have easy and free access to live action.” 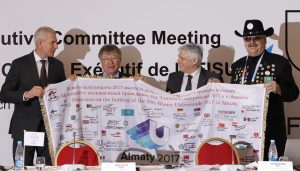 FISU Oceania Continental Association delegate Martin Doulton brought up the question of esports and whether it should be part of FISU’s global strategy going forward. “If we want to keep pace with the current scenario we have to acknowledge that 200 million people or more are playing League of Legends,” he said. “This is higher than any other activity. So, what are our plans for this?”

FISU President Matytsin acknowledged that this is an important, yet tricky, topic. “As a sports federation we have to promote physical activity,” he said. “At the same time, we cannot ignore the trends. We want to focus on how to use esports for education. We are in contact with the Olympic family for this, with the IOC, and are thinking actively about this.”