With 5 teams from four different countries, our continent is present in another international event of university sport. Brazil, Canada, Mexico and Uruguay from yesterday until the 1st of December will be fighting for the FISU World Cup. 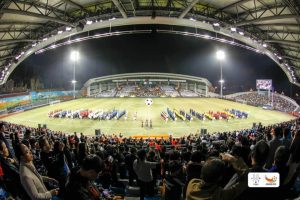 This is the first FISU World Cup of Football, where three universities, from our continent, in the male branch, and 2 teams in the female branch are participating with the Paulista University has teams in both sexs.

In the Male branch for group C with the Paulista University are: the Myongji University(KOR), Borys G Kyiv University(UKR) and Int. University Lng Media(ITA). Group B is conformed by Bangkok Thonburi U (THA), Kotebe Met. U(ETH), Beijing IT(CHN) and the Aut. U Mexico State (MEX)

And with the Rep. University(URU) complete the Group D, the Split U.(CRO), Hohai Univ.(CHN) and the Smolensk State Academy (RUS). 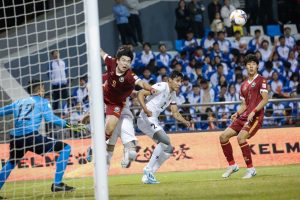 The ex pro football player, Luis Figo, was part of the group draw. Sebastián Verón, also ex pro football player from Argentina, was present in the Opening Ceremony, these important personalities collaborating in the event, evidence the impact of the FISU‘s growth in the world of professional sports.

A Colourful Opening Ceremony, all the 16 men’s teams in action as group stages begin and we had big wins for the american teams of Paulista University (BRA), University of the Republic (URU), Autonomous University of Mexico State (MEX). All this in the day 1 of the Uni Football in Jinjiang, China.